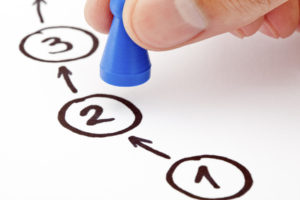 As a mentor coach and ICF Assessor, I hear the positive impact on the client when the coach takes the time to explore and clarify the coaching agreement for the session, and then uses the agreement as their compass through the entire session (refer to previous blog article “True North“

Equally, I hear the impact when the coach doesn’t explore and clarify enough to know what the client really wants to achieve in the session and then doesn’t attend to the client’s agenda throughout the entire coaching session. The coach asks what they’re interested to know about and doesn’t fully attend to the client’s focus and agenda. So there might be great conversation yet by the end of the session the client is no closer to understanding how to close their gap from where they are now to where they want to be.

The coaching session agreement has a two-fold purpose;

The Agreement in Three Parts

As you progress from ACC skill to PCC skill and then to MCC skill, the coach needs to go deeper into the “Who” not just the “What.” And there has to be a deeper connection to the client, not just going through the motions of the process of getting the focus/outcome clarified.

Let’s look at the coaching session agreement in more depth through the beginning, the middle and the end of a session, and by credential level.

1. The Beginning….from the very first breath!

The beginning is very important to the success of the whole coaching session. If you don’t know what the client wants to focus on and accomplish, you may be having a great conversation yet it hasn’t served the client’s purpose.

I always say that “coaching starts from the very first breath” meaning that the first thing the client says, or maybe it’s a sigh…the coaching session has begun. This requires full “Coaching Presence.” You don’t ignore the sigh or the client’s energy level; instead you inquire about what you notice, e.g. “That was a big sigh. What’s happening?”

Or you may inquire about what has occurred since last session, listening for actions successfully taken, and what they didn’t get done. Only after some conversation may you get to the coaching agreement, but anything before clarifying the focus/outcome of the session could help to inform that focus/outcome. So being present from the very first breath is vitally important.

At ACC skill level, the coach stays at a basic level:

Topic/Focus – What do you want to work on today?

Desired Outcome – What do you want to walk away with by the end of the session?

The coach then attends to the client’s agenda, which is mostly about attending to the client’s presenting problem or issue and trying to solve it at the level of “What” to do.

At PCC skill level, the coach goes further into understanding not only the What, but more about the client as a ‘whole person’ which includes their thinking, beliefs, emotions (the Who). The coach is curious about the ‘human being’ of their client, not just about their issue. Often coaching agreement questions will be asked in a logical sequence, with discussion and clarifying occurring along the way.

Topic/Focus – What do you want to talk about today?

Meaning/Importance – What makes this topic a high priority for you today?

Desired Outcome – What do you want to have moved forward around this topic/focus by the end of the session?

Barriers – What might be some of the things we’d need to explore or address to get you to your outcome?

Measuring Success – What would indicate to you that you have achieved your desired outcome by the end of this session?

Earlier I stated that ‘coaching starts from the very first breath.” Well this is vitally important for MCC skill level because the coach needs to be paying full attention to how the client shows up to the coaching session and be present to what they say, how they say it, their emotions, and/or what isn’t being said but is ‘in the space.’

The coach brings their full listening to what the client is saying as well as noticing what their sensing to what is occurring with the client in the moment with their energy, tone, pace, emotions or choice of words. The coach’s mantra is Who, Who, Who! Who is this person I’m coaching? Who do they want to Be? Who are they Being? What beliefs, habits or behaviors (Who, Who and more Who) needs to be addressed if the client is to achieve their What?

Being in connection with the client is the first priority, which comes from being fully present (Coaching Presence). The coach is deepening their noticing and inquiry into how the client is thinking, feeling, or being. Being fully connected to the client deepens trust and creates an intimate space for the client to speak their truth, and to deeply trust the questions, observations or intuitions their coach might offer, which might challenge the client’s thinking. The client may feel transformed as a result of the coaching, rather than just having different ideas.

As the coach explores all of how the client is coming to the session, there is a natural uncovering of what is important to the client, or what might be getting in the way of them moving forward and therefore what might need to be addressed.

As the conversation unfolds, the coach senses the right time to clarify the coaching focus/agreement such as, “Given all that we’ve talked about so far, what is important for you to now have clarity about by the end of our time together today?” This might occur 5 or 10 minutes into a coaching session, and very unlikely to occur in the first 30 seconds or even 1-2 minutes.

There might be follow up questions that are more on the logical side such as, “What would indicate to you that you have received the value you were seeking from our coaching today?” However first and foremost, the coach’s priority is to stay in full presence and connection with their client and seeks the right timing to ask this, and the best language to use.

The coach takes the client’s lead on where to go next in the coaching session, depending on the client’s response. Oftentimes doing this process check-in allows the client to reflect on where they started and where they are now, often leading to emerging awareness, which may then lead to them knowing what to do (Designing Actions).

The mid-point check-in applies to ACC, PCC and MCC skill level. The difference being the continuum from asking the question no matter what the client just said (ACC) through to sensing the right timing and approach so as to stay in full connection and partnership with their client (MCC). At MCC skill level, the coach naturally weaves their questions or observations back to the client’s desired outcome, and may do so often, not just once.

ACC – You said you wanted X from our coaching session. What did you get?

PCC – When you think back to what you wanted from our session, where are you now? You said you’d measure success by X. Did you get that?

MCC – When you reflect on what you wanted from this session, what progress did you make? What is still lingering for you? How do you want to address that between now and the next time we meet?

By thinking of the coaching session agreement as having a beginning, a middle and an end, you are more likely to stay focused on the client’s agenda throughout the session. And you’ll be dancing a dance that is in step with your client.