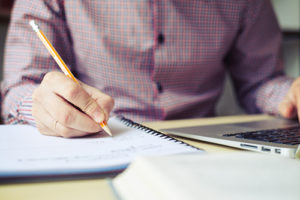 When I first began coaching 20 years ago, I was like every other new coach; trying to figure out how to use questions as a main way of drawing out knowledge from my client. This was so different than the consulting work I was doing, where I was paid for my expertise, therefore my knowledge. At the beginning of my coaching career, I’d take a lot of notes, so I could remember what the client was saying. This is true of most new coaches; in order to ask a good question, we need to recall what the client says in order to ask a relevant question.

Fast forward 20 years, and my note-taking has dramatically changed. I may write on average a half page of notes per coaching session, or less.

In the beginning, I was learning a whole new set of coaching skills, including the core skill of Listening. One of the most humbling things I learned is that I wasn’t a good listener.

This quote from Stephen Covey says it well;

Yes, I was listening for where I could reply with my expertise. Where I thought I could help the client and add value.

As my confidence in my coaching skills increased, I shifted from listening to remember what the client said and where I could give my expertise/knowledge, to listening to all the client was saying, whether verbalized or not.

The ICF Core Competency of Active Listening is defined as, “The ability to focus completely on what the client is saying and is not saying, to understand the meaning of what is said in the context of the client’s desires, and to support client self-expression.”

With the help of my Mentor Coach at the time, I began to realize I had a “Trust Gap,” meaning I did not trust that I would hear completely what my client was saying, and certainly not without extensive note-taking. And then to listen for what the client might not be saying? That required being present and to listen in a different way than I knew how to do. However, as I’m a determined self-learner who wants to grow their professional skills so I can be the best coach I can be…I challenged myself to listen more for Who the client is, instead of What expertise I could contribute.

Listening for the Who of the Client

What I began to realize as I continued to evolve my coaching skills, was I could not write a lot of notes and listen ‘completely.’ If I was going to listen to what the client was not saying, I had to become more present and change the way I listened.

Writing notes made me present to the words, and gave me a feeling of safety. Yet what was I missing that the client might be communicating through omission of words? Or perhaps through tone of voice, or energy shifts? Or if in-person with the client, while I’m looking down while writing (or typing), what facial and body language was I missing?

I’ve come to know that giving observations or asking questions about the omitted words, or the body/facial/energy shifts, can be very valuable for a client to hear. We’re mostly so focused on hearing words, that we miss all the other available elements of listening.

It might be useful to consider the evolution of a coach and how that requires a shift in the way we listen, and what notes we write. As we grow our coaching skills, there’s a key distinction in how the coach listens.

At the beginner (or ACC) skill level, the coach is more focused on listening through the filter of problem solving, or what we term the “What.” This type of listening and subsequent coaching, focuses on solving the presenting client issue, and creating strategies, tactics and actions that have worked for the coach, or work in situations like the client is facing.

As we progress to intermediate (or PCC) skill level, the coach shifts some of their listening to “Who” the person is. This means listening and inquiring into how this human being (also known as a client) solves problems; what their strengths are, how they have overcome challenges, what values drive their behavior. There’s still some focus on What or problem-solving, yet listening has shifted to drawing out client strategies and self-knowledge.

As we progress to mastery (or MCC) skill level, the coach shifts the mindset to there is no problem that the coach needs to help the client resolve. Listening is for “Who” this human being (also known as a client) is now, and who they want to become. Their presenting issue is used as an opportunity to connect the client to how to become better at solving problems for themselves.

The coach provides a listening space where the client can explore what they know, and what they don’t know about themselves, and how they solve problems. Yet it’s much more than that. The coach is now significantly using all their senses, including intuition to listen for what the client might not be saying. The coach has shifted into a mindset of strengthening the client’s ability to access their self-knowledge and ability to use that more.

Here are a few examples of what to listen for beyond the words:

With all of these examples above, it’s much more challenging to listen in this way when taking notes because that is where you’re putting your attention. You’ll be looking at a computer keys or screen, or your note-pad which means you’re present with your computer or your note-pad, more than the client.

Some reasons coaches take a lot of notes

Here’s what I recommend taking (minimal) notes of:

As a seasoned mentor coach, and ICF assessor for coaches preparing for MCC, PCC or ACC credential exams, I listen to A LOT of recorded coaching sessions. Sometimes a coach is writing so much that it’s the predominant sound on the recording. Or the coach is typing and the sound of the keys is prevalent, taking away from the silent space for the client to use.

I invite you to consciously review your note-taking practices when coaching clients.

What is the purpose?

What belief might be worth examining, in order to shift from extensive to minimal note taking?

How might your note-taking practices be keeping you from deeply listening?

It’s up to you how you take notes on your responses to these questions….or not. 😊

Start early with your mentoring requirements in the year of your renewal.

4 thoughts on “Why am I still writing?”