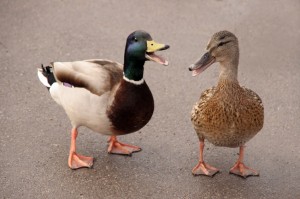 Here are five of the main ICF core competencies most often in play:

The other competency that is often present is Creating Awareness, which may be prompted by your questions, reflections or observations.

If you know The Target Approach, then you are aware that a coach’s presence is the epicenter, because it’s the coach’s mindset and “Way of Being” with the client that determines what the coach chooses to focus on next. At any point, the coach can open and expand, or close the client down through their presence.

As a coaching session nears the end, the coach’s presence is as important as ever. The coach needs to remain present to noticing shifts in the client’s energy in particular. This is often indicated through body language, tone and pace of voice. For example, the coach may say,

“I notice that your energy seems much lighter than when we began. How would you describe how you’re feeling right now?”

This is a generic example question as are the rest throughout this article. It’s up to the coach to tailor their questions by incorporating the client’s unique use of language.

If the coach has been asking questions that cause their client to think outside the box about their situation and reflect deeply to find their own answers, then awareness and thoughts of possible next steps will have naturally occurred to the client at any time during the session. It’s important that the coach be present to unfolding actions at any point the client mentions them and give space at that time for them to write down actions.

To reiterate, you don’t want to leave it to the last few minutes before first asking about actions, because you need to give the client space to reflect on their insights, and how they might want to maximize that awareness into actions. For example, the coach may ask,

“What insights have you had that you can turn into actions?

“What are the actions you’re now ready to commit to?”

“What actions are you thinking about that you are not ready to take at this time?”

“What insights have you had about how you’d need to approach taking this action?”

As you inquire about actions, the coach will naturally ask follow up questions tailored to the client’s language to strengthen the clarity and commitment to their actions. If you’ve been presently listening (and asking great questions) throughout, then the client may have already thought through some of support, resources or potential barriers to taking their actions. Mostly they haven’t, so this really helps the client to determine what they can commit to, and what it really is going to take to follow through:

“Who, if anyone, would you reach out to for support in following through with that action?” “What would you ask for from that person?”

“What resources might you want to draw on in order to take that action?”

“What potential barriers might get in the way of you taking that action?”

“What would your mindset need to be in order to take that step?”

Near the end of the session, circle back to the coaching agreement again. What was the stated outcome the client wanted? How were they going to measure progress toward their outcome? For example, the coach may ask, “As you review what you wanted from this session, what did you accomplish against what you said you wanted?”

One of the things I have to pay attention to myself is not giving some sort of parting thought to the client that summarizes what they’ve just said. Give that power over to the client by letting them have the last word. This deepens trust and intimacy because you are putting the client front and center to the very end. For example, the coach might ask;

“How are you different than when we started our coaching session?”

“What would you say is the biggest learning you had during this session?”

Coaching is a wonderful process for assisting a client to look at where they are now and where they want to be. A great coaching session will be one where the coach has asked questions and made observations throughout that cause deeper reflection, and awareness to emerge from within the client.

Some coaches get caught up in the discovery part of the coaching process. Yet it’s equally important to help the client to leverage their awareness into actions and help them to think through how they will successfully move forward outside the coaching session.

And of course, give the last word to the client because it’s about the client’s wisdom and insights, not the coach’s that are most important. “Is there anything else you would like to say before we finish up this session?”

Registration for our last 3 month Mentor Coaching Group of 2014 is now open.