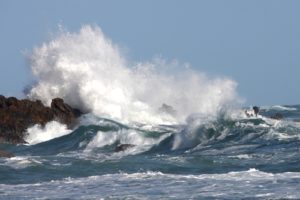 Handling conflict or having challenging, difficult conversations is often a topic a client will bring to a coaching conversation. We’re never going to agree with everyone on everything.

As we move through our life, our hierarchy of what we value might change. Yet others might not change their hierarchy of values. Circumstances at work change because of a new manager, a new philosophy, a new owner, and so on. There are so many reasons which are normal that mean we’ll have a conflicting view with another person, personally or professionally.

How to coach conflict?

There are many great books written on this topic, and some I have read. In this article, I’m focusing on how to use knowledge of a specific model to inform a coach approach in a coaching session.

Many coaches will bring out a model and teach the model. That, to me, isn’t the starting point, but could be the ending point in a coaching conversation where the client wants to know more. We get attached to our models, yet for a coach, it’s the ability to use models and knowledge to inform coaching questions and observations that is most powerful. That’s because we give our client the opportunity to discover connections for themselves rather than using an expert approach via a model.

Please hang in there with me as I go through my definition of conflict, the model I’m referring to, then how to use in a coaching approach.

Here’s my definition of conflict; “My viewpoint about something I’m invested in, is discounted as not a valid viewpoint by another, to the point where I personally feel invalidated.”

There are many times we have a different point of view than another, yet it doesn’t feel personal. We can appreciate their viewpoint, and not make the person wrong for thinking that way, even if we don’t agree and never will agree with them. The art of debating is one that is useful, and perhaps could be a mandatory skill for everyone to learn in school. In a debate, we learn the art of presenting information and beliefs, hopefully in a respectful way. Yet debate is not what often occurs.

One person is so invested in being right according to their beliefs, that they can’t or won’t respectfully accept that someone else can have a completely opposite or different view that is equally valid. Or one person assigns ‘poor intentions’ to the other person rather than seeking to understand what their thinking is behind their action.

I remember when I first moved to the United States in 2001. As an Australian, I was used to being sarcastic and off-handed with comments, and was surprised when this wasn’t appreciated by Americans. Some thought it funny and endearing, while others found it offensive. I first had to realize I was being sarcastic, which is such an ingrained part of the Australian psyche I didn’t even realize it wasn’t normal for another culture.

Desire to Listen and Understand

Once I was aware of this, I understood the validity of what others were saying, and decided to stop that behavior. It took time and effort, and a desire to listen to how others received my sarcasm. One of my highest values is to learn and keep evolving as a person, as that is a motivator for me in my life. This is in service of my [inner] ideal vision of myself and to match most closely with my [outer] behavior.

So many times, conflict continues because one person won’t listen to the other, to seek to understand how the other perceives the situation. We can be attached to being right about our way of thinking or acting. When someone doesn’t agree with us or pushes back in some way, we might react in one of these ways:

The Ladder of Inference

A model I was introduced to in 2006 gave me a wonderful way to start to pull apart what might be at the heart of a conflict. You may have a different model you like to reference, and that’s totally okay.

This model is attributed to Organizational Psychologist, Chris Argyris, and was used by Peter Senge in his book, “The Fifth Discipline: The Art and Practice of the Learning Organization.” 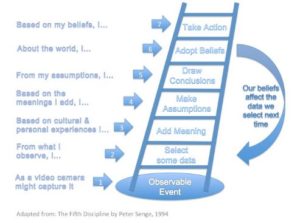 The model is called, “The Ladder of Inference” and describes the thinking process that we go through to get to a decision. The thinking stages can be viewed as rungs on a ladder. This whole thinking process occurs very quickly and without realizing all the connections and assumptions we’ve made to get there. We might only talk about the decision or action we’re going to take and not reveal how we climbed the ladder to that decision.

Work through the initial wave of emotion

The first recognition, not really articulated in this model, is emotions. We usually have an initial emotional reaction to what another says or does. This might be internal or externalized emotion. Mostly it’s going to be some form of anger, whether we call it anger, rage, disappointment, frustration or something else.

As quickly as possible, I seek to take myself away from the situation so I can process my emotional reaction with any number of ‘visualization’ or other tools I have at my disposal that get into the core of the feeling and dissipate it. I may go to the restroom if it’s in-person. If on the phone, I get off the phone, and call back later. Maybe I go to a Bikram Yoga class and sweat it out! Or the gym, or a walk.  My best strategy is to wait at least overnight to respond in-person, by phone, or via text or email. There is something scientifically proven in what the brain does in processing overnight, and it works for me! I almost always wake up with a more balanced perspective. And from that place, I can work through the stages in the Ladder of Inference.

The basis of this model is separating data from meaning. Starting at the bottom of the ladder, what is the event, then what data am I paying attention to (and what am I discounting). We then add meaning to the data.

When a coaching client has a conflict they want to work through, my initial coaching question might be:

“What is the data, or facts about this situation?”

Then, “What meaning are you giving to those facts?”

Then continuing up the ladder, I might ask, depending on what the client says:

“What assumptions are you making?”

“What beliefs are important to you in this situation?”

“How are those beliefs informing your assumptions?”

“What conclusions are you drawing?”

“What other information (data, facts) might you be excluding?”

The possibly most ‘damaging’ part about this model is beliefs we hold, which determine the meaning we then assign to the actions of another. Not only for this event, but then we make assumptions that inform future events. The next time we encounter something similar to this situation, we immediately bring in our belief and assumptions as if they are fact, rather than realizing that we don’t have all the data (facts) about this particular situation.

One of the most important insights I gained from this model is to assign good intentions to the other person. So often, we draw a conclusion as if we know what the other person intended. We don’t. We can only assume, and that is dangerous. Instead, ask, “What was your intention there?”

The late Dr Stephen Covey gives another pearl of wisdom with Habit #5 from his classic book, The Seven Habits of Highly Effective People,” – “Seek first to understand, then to be understood.”

As a coach, seek first to use your knowledge of a model to inform your questions, then carefully consider if it’s still of value to the client to share the full model. Allow our client to discover and make meaning for themselves. And perhaps they’ll design their own model that makes sense for them along the way.