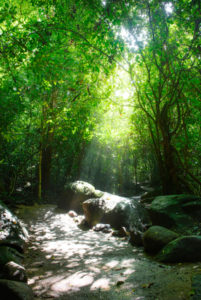 As a mentor coach I’m often asked by coaches if there are some clients who aren’t ready to be coached on a deeper level or the “Who.” My response is that it isn’t even a question for me to consider. How can I not coach the whole of the client when that is where the real value of coaching lies?

I’ve sought out some peers who I deeply respect and have had some wonderful conversations so far on this topic. One of my peers I spoke with is Harriett Simon Salinger, MCC of WiseWomanCoaching. Harriett is not only passionate about the inquiry into Presence but lives from this state of being. I’ve personally known Harriett for many years and can attest to this. She teaches me a lot by her presence and her way of thinking and processing the world. That is because she is committed to witnessing the deeper truth in herself and in others. One of the things she said that deeply resonated with me is that as coaches, “we are to be present to the humanity of the other person.” This is the core of what drives Presence and where a master coach coaches from, not at the level of problem-solving.

Every client is perfectly imperfect

A master coach never forgets they are in the presence of another perfectly imperfect human being, and recognizes that their client has good days and bad days just like we all do. We all have dreams that come to fruition and many that don’t. We all have concerns for loved ones, and for things we are moved by in the world. We all have times of struggle as well as times of triumph.

A master coach lives – and coaches – from the understanding that we are all the same at our essence, yet we are all beautifully individual. There is humility present, yet confidence in their coaching presence and coaching skills.

Whenever we use coach jargon of coaching the “Who” of the client, we are talking about relating to our clients from their humanity and their whole self. We go beyond seeing them as having problems they want us to solve, to helping them to reconnect to their deeper truth of what they truly want. We connect them to their resourcefulness, values and strengths, and anything that will support them in working out how to move forward with their ‘problems.’

A master coach perceives problems differently – they are merely a surface portal into exploring what the client really wants or may need to grow within themselves in order better handle their ‘problems.’ This applies to any type of client, one that may be a technical leader who wants to better communicate with his team and peers (like I often coach) to coaches I mentor toward their ICF credential at MCC, PCC and ACC levels. Coaching the “Who” works with every single type of client you can think of.

Newer coaches tend to think of coaching as something they are doing, whereas a master coach lives from the place of being in the inquiry of what it means to be human, which naturally informs their coaching. That is why Coaching Presence is the core competency to grow in to and live from. From this space, a master coach asks questions and makes observations that are more present to the depth and wholeness of the client, and reconnects them to their ability to be resourceful and solve their own problems.

Where to Start with Developing Presence as a Way of Being?

Here’s a simple (but not necessarily easy) exercise to help develop presence as a way of being. Think of someone who is very different than you. They may be known to you personally, or in the public, religious or political arenas. I bet you can think of at least one person you’d never want to have dinner with!

Stop and take inventory of the things you believe are different between you and them. That should be pretty easy!

Next, take inventory of what you believe is the same about you and that person. Do they have blood running through their veins? Eyes? Ears? That is where you may need to start. Be present to the judgments you have about them as you look for what’s in common between you and them. You don’t have to like them or agree with them. But can you see them as perfectly imperfect human beings – just like you?

What we judge in others is often something we disown or judge about ourselves. What may you need to own in yourself so you live and speak truthfully and at peace with being a perfectly imperfect person?

2 thoughts on “Coaching Presence is a Way of Being”